On January 22nd, 2018, Amazon opened his first brick and mortar grocery shop to the public, Amazon Go, located in Seattle[1]. Amazon Go is not just the first physical grocery shop built by the company based in Washington, but it actually is the first check-out free shop ever created.

Welcome by an enthusiastic public, the concept store could constitute the future of retail stores because of the time-saving and high technological features. Customers, indeed, once chosen the products they want, simply have to walk out the store to have their account charged, and the receipt is made visible on their Amazon app. No cashier is needed since everything happens in an automated and digital way.

Amazon itself little explains about how the magic happens: during the last five years the company has been working on the implementation of three different technologies: computer vision[2], sensor fusion[3]and deep learning algorithms[4]. Those technologies, which allow the functioning of autonomous cars as well, resulted in the creation of a system of cameras and sensors that falls into the definition of ubiquitous computing[5]. The created system has been called by Amazon “just-walk-out technology”, that seems to be much more than a mere enhancement of Radio-Frequency Identification (RFID) Technology, used since years by many retailers[6]. 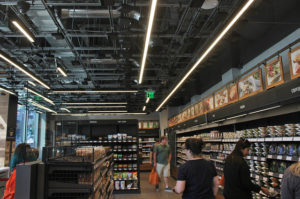 View on the inside of Amazon Go in Seattle. It is possible to see cameras and sensors in the ceiling. Photo: Amazon Go at Madison center, credits to SounderBruce, licence CC BY-SA 2.0.

Recently, the company has opened a new store in Chicago, but have not announced whether other Amazon Go stores will be opened outside United States. However, on December 5th, 2016 the company registered the trademark “Amazon Go” in the United Kingdom[7]. As Amazon already used UK as a first non-American market for new formats, the registration of a UK trademark suggests that it constitutes the first step for the new concept of grocery shop to enter the European market.

The future entry into the EU market involves not only enthusiasm and fear, respectively in customers and competitor retailers, but also juridical issues. The first issue is the one related to the application of the General Data Protection Regulation 2016/679 (GDPR) to customers’ data[8]. The second legal issue is the one regarding the implementation of the information duties set forth by both the Directive 2000/31, also known as E-Commerce Directive.

Directive 2000/31 aims to create a legal framework to cover certain legal aspects of electronic commerce in the internal market[9]. It applies to information society services, as described by Recitals 17 and 18. Information society services (“ISS”), indeed, are all services caractheterized by the following attributes: must be provided for remuneration, at a distance, by means of electronic equipment for the processing and storage of data, at the individual request. An example of ISS defined by Recital 18 is the selling goods on-line.

Specifically, Recital 17 describes IS service as those services which are:

An example of SSI is the selling of goods on-line.

Section 3 of the second chapter of the Directive deals with contracts concluded by electronic means. Specifically, art. 10, par. 1, imposes the service provider to provide the consumer some pieces of information, in a clear and comprehensive and unambiguous way before the placement of the order[10].

The first requirement, the technical steps to follow to conclude the contract, is needed in order to prevent that people are contractual bounded before knowing it[11].

The second requirement, the information about whether the contract concluded will be filed and will be accessible and, has evidence purposes.

The third requirement, the possibility to correct input errors, can be fulfilled by showing an overview of what has been ordered before the order is finalized.

Paragraph 2 of art. 10, then, sets forth the obligation to indicate any relevant code of conduct to which the service provider subscribes, and how it can be consulted electronically.

Those requirements must be met, for example, by all websites which include an e-commerce page. There is no doubt, indeed, that the Directive applies to Amazon’s website. Whether it applies to Amazon Go stores as well, is not to be take for granted.

Before Amazon Go’s era, other doubts arose regarding the possibility to define or not a service as an information society service, in the meaning of Directive 2000/31.

The attribute of the distance is the most problematic: what if a service is ordered via a mobile phone app while parties are simultaneously present[12]? The service would fall into the definition of ISS, since it is provided for remuneration, by means of electronic equipment, at the individual request. But what about the distance? There is no doubt that distance communication is used, but parties are simultaneously present. The rationale under the obligations set forth by art. 10 is that parties which are at a distance are not able to communicate face-to-face, creating a gap of communication, as suggested by the definition of distance contract in the Consumer Directive as well[13]. A suggested criterion to rectify the definition would be whether face-to-face contact is possible. On such a basis, if the parties of a contract can have a face-to-face contact, the

Amazon Go involves both physical and electronic elements, since the products are physically selected by the consumer that pics them from the shelves of the market, but are then detected by all cameras and sensors placed inside the retail. Comparing the definition made by Recitals 17 and 18 of the E-Commerce Directive with the technology involved, it is undeniable that the service is provided upon payment at the individual request, as well as it is carried out through means of electronic equipment for the processing of data, since the payment happens through Amazon Go’s app, and the product are detected and analyzed by cameras and sensors. The element of the distance is, again, the puzzling one.

Indeed, at Amazon Go, even if the physical presence is required to choose products, once the products are choses, they are automatically added to the cart, without any possibility to review it, and check whether everything is correct. Clients just have their account charged, and, after receiving the receipt, they can check the product list.

So, the contract is concluded when the consumer is inside the store, but the physical presence does not guarantee any possibility to check and modify the order[14]. Due to this peculiarity, the guarantees granted by art. 10 of the E-Commerce Directive would be appropriate to Amazon Go’s technology.

Even if on a hypothetical basis the obligations set forth by art. 10 should apply, the matter about how to implement them inside Amazon Go stores is not easy to solve. Some examples could be:

The risk of implementing such measures is for sure the slowing down of the Amazon Go philosophy. The just-walk-out technology would become a “just read the information, check everything, authorize the transaction and walk out” technology, that is definitely less appealing.

The issue doesn’t just regard Amazon Go’s technology, but potentially all those Internet of Things and Ubiquitous Computing devices and applications that allow people buy something and which satisfy the “electronic means” condition.

The new paradigm of supermarket created by Amazon is certainly a turning point in the retail stores panorama. However, it’s worldwide diffusion could be restrained by laws such as the E-Commerce Directive that, with the aim of safeguarding the weaker party, would force the new technology to be less disruptive than it actually is.

[1]The company announced the opening of Amazon Go presenting the store in a video and answering a short FAQ on its website accessible via the following link https://www.amazon.com/b?ie=UTF8&node=16008589011.

[2]Computer vision is a field of science which aims to create systems able to understand the world outside and react to external stimuli, for further details please see Coldewey,WTF is computer vision?,14 Nov 2016, available at https://techcrunch.com/2016/11/13/wtf-is-computer-vision/.

[3]Sensor fusion is the use of sensory data from multiple sources combined into one comprehensive result. Sensor fusion systems are useful in image processing, in certain kinds of scientific research installations, and in camera systems; for further pieces of information, pleaseseeElmenreich, An Introduction to Sensor Fusion, Research Report 47/2001, Vienna University of Technology, Austria, Nov. 2002, available at .

[4]Deep learning, simply made, is the collection and use of algorithms to analyze data and make decisions, for further details, please see Marr,What Is The Difference Between Deep Learning, Machine Learning and AI?, Forbes, 8 December 2016, available at https://www.forbes.com/sites/bernardmarr/2016/12/08/what-is-the-difference-between-deep-learning-machine-learning-and-ai/#6ca9c15e26cf.

[5]Ubiquitous computing, also known as pervasive computing or ubicomp, defines the concept of “computing everywhere”, meaning that computing can occur in any device, location, and format like terminals in everyday objects such as a fridge or a pair of glasses. For a further description, please see https://internetofthingsagenda.techtarget.com/definition/pervasive-computing-ubiquitous-computing.

[8]Amazon Go’s ubiquitous surveillance technologies, which use cameras, microphones, device identifiers, collect and use an amount of personal data, indeed, to identify the user and detect which products he chooses and when he gets out of the store. This massive use would pose a GDPR compliance challenge.

[10]Art. 10 specifically requires the showing of: a. the different technical steps to follow to conclude the contract; b. whether or not the concluded contract will be filed by the service provider and whether it will be accessible; c. the technical means for identifying and correcting input errors prior to the placing of the order; d. the languages offered for the conclusion of the contract.

[12]That’s what actually happens at McDonalds’s touch screen Easy Order, where it is possible to choose and pay your McMenu while you are inside the restaurant and collect it some minutes later at the cashier. But also, it is possible to order at Domino Pizza from the mobile app on your smartphone, both if you are inside the restaurant or not. And the same is possible for many others physical shops which have a mobile app, as well.  See Lodder, supra n. 11 for other examples.

[13]Directive 2011/83, art. 2, chapter 1, number 7: “distance contract’ means any contract concluded between the trader and the consumer under an organised distance sales or service-provision scheme without the simultaneous physical presence of the trader and the consumer, with the exclusive use of one or more means of distance communication up to and including the time at which the contract is concluded”.

[14]Art. 10 of Directive 2000/31 aims to fill the gap created by the distance, with the provision of additional information. In a face-to-face contract, indeed, how to conclude the contract, the language and the possibility to check and modify the cart is intrinsic to the physical presence.